Carved and pioneered to perfection by the Nabataeans, The Lost City of Petra, also appropriately known as ‘The Rose City’, is a crumbling pavlova of wreck and ruin. Beautifully carved from sandstone cliffs, no two houses or tombs are the same. Steeped in history and tales from as early as the 6th century BC, and fringed by ominous rock in rose gold and copper hues, you may recognise this iconic setting from Indiana Jones and the Last Crusade.

The infamous Al Khazneh entrance features sky high pillars, intricate doorways and windows that have stood for thousands of years at an unbelievable forty metres high. This incredible piece of human engineering is also known as ‘The Treasury’ because it was said to contain an abundance of gold, jewels and riches. In 1985 The Lost City of Petra made the UNESCO world heritage list and was recognised as one of the New Seven Wonders of the World in 2007.

The legends say that the Egyptians hollowed out the many rocky corridors leading up The Treasury as an offer to the Gods.  These intricate rocky paths lead to some incredible sights, including the Royal Tombs of Petra – home to wealthy individuals, such as Kings and Governors. There is also what claims to be a Roman Amphitheatre, although, excavations have shown that the amphitheatre was actually carved out by the Nabataeans around the time of Jesus Christ.

If you are lucky enough to watch the sun set over Petra, it is the perfect opportunity to capture some photographs as the colour of the temples and rocks change to burnt orange and red, before filtering into a purple hue under the parasol of shade that sweeps over Petra.

If you would like to take up this once in a life time opportunity to visit the sand kissed ruins of Petra, click here to check out Fred. Olsen’s 2015 Grand Voyage. 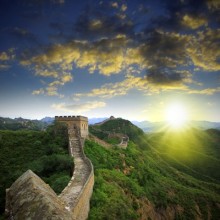