Julian Brackenbury’s new role completes Fred. Olsen’s recent reshuffle of its leadership team, with a round of new appointments to better reflect all aspects of the ‘customer journey’, from the start of the booking process through to the end of the cruise holiday. Clare Ward was appointed as Director of Product and Customer Services in November 2016, and Justin Stanton was recently promoted to Sales and Marketing Director.

Julian Brackenbury has been Deputy Hotel Operations Director for Fred. Olsen Cruise Lines, based at its Head Office in Ipswich, Suffolk since April 2016. In his new role, Julian will continue to take responsibility for the day-to-day running of the Hotel Operations Departments, both in Ipswich and across the Fred. Olsen fleet of four cruise ships – Balmoral, Braemar, Boudicca and Black Watch.

“Julian has an excellent knowledge and understanding of the requirements, standards and day-to-day activities involved in running a cruise ship and hotel operation. Julian’s enthusiasm, knowledge and expertise will continue to be of great benefit to Fred. Olsen, and we know that he will relish the challenges of his wider remit. We wish him well in his new role.”

Julian Brackenbury replaces Susana Entrena, who takes on a newly-created role of Hotel Project Manager, planning, overseeing and managing the implementation of maintenance and refurbishment projects across Fred. Olsen’s fleet, both during dry docks and / or whilst the ships are in service. 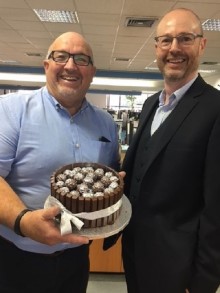 Fred. Olsen's Mike Evans celebrates a quarter of a century with the cruise line!

Fred. Olsen Cruise Lines has been awarded the coveted ‘Gold Trusted Service Award’ by independent review site Feefo, for the fourth year running. To date, Fred. Olsen has received over 19,000 customer reviews, with 95% of these being in the ‘Good’ or ‘Excellent’ categories‎.