Fred. Olsen Cruise Lines is delighted to win two major awards in Cruise Critic’s prestigious ‘UK Cruisers’ Choice Awards 2014’, chosen entirely by cruise guests. Fred. Olsen’s 929-guest cruise ship, Braemar, has been recognised as the ‘Best Small Ship for Embarkation’, with a score of 4.7 out of a total of 5, and 804-guest Black Watch has been named ‘Best Small Ship for Shore Excursions’, with a rating of 4.4 out of 5.

Both Braemar and Black Watch were named in the top five ‘Best Small Ships Overall’, being rated number four and number five respectively.

Cruise Critic is the largest online cruise community, with more than one million members, and the site has more than three million visitors globally, every month.

“Winning a ‘Cruisers’ Choice Award’ is a fantastic accolade for cruise lines, particularly as they’re based entirely on review ratings submitted by cruisers over the course of the past year, rather than votes.

“These awards offer a great insight into British consumers’ first-hand experiences and feedback of the cruises they have been on.”

“It is important to us that we always try to offer the very best small-ship cruise experience that there is, and we are very proud that our efforts have been recognised by Cruise Critic and its members in this significant way.

“At Fred. Olsen, we believe that your holiday starts from the very moment that you arrive with us at the Cruise Terminal, which is why the embarkation process is so key, with a warm Fred. Olsen welcome and excellent ‘service with a smile’. We also put a lot of thought into creating new, exciting and tailored shore excursions for our guests, especially on our smallest, most traditional ship, Black Watch, which has the highest repeat rate of guests across our fleet, with sometimes up to 60% returning Fred. Olsen cruisers.” 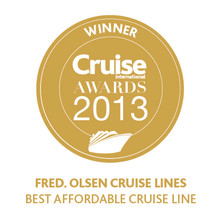 Fred. Olsen Cruise Lines was delighted to be voted ‘Best Affordable Cruise Line’, for the second year running, at the 2013 ‘Cruise International Awards’, as well as being awarded runner-up ‘Highly Commended’ in the ‘Best Cruise Line’ category.