As an integral part of its Corporate Social Responsibility programme, Bonheur makes discretionary annual contributions towards, not only social and charitable causes, but also projects and activities considered to be close to its sphere of interest. As such, donations towards third-party air and sea rescue activities – in support of safeguarding both the thousands of passengers and staff members aboard Fred. Olsen-related seagoing vessels – have been identified as falling within this remit.

“We are delighted to be able to pass on contributions to these two very worthy life-saving charities in the UK, the RNLI and East Anglian Air Ambulance, in such a significant way.

“With our continued focus on upholding the highest standards of safety and well-being in all areas of our operation, it is important that Fred. Olsen works with the relevant agencies and organisations, in order to be able to provide the best facilities for our passengers and colleagues in the rare event that the worst should ever happen at sea.

“Fred. Olsen Cruise Lines has a long-established partnership with the RNLI, having worked with this seafaring charity since the 1960s, and we also have a close relationship with the East Anglian Air Ambulance, which provides a vital resource across our region and the county of Suffolk, where our Ipswich Head Office is located.”

“We are immensely proud of the partnership between Fred. Olsen Cruise Lines and the RNLI, which has been built up over the last 50 years. This donation means a lot to us and will enable the RNLI to fund even more life-saving equipment and provide essential training to the crew members who are so vital to the rescue service that we deliver, day in, day out.”

"We are incredibly excited to work with Fred. Olsen Cruise Lines. With their main office so close to ours in Ipswich, it means we can work closely and collaboratively to help save lives in the region.

“We'd like to thank them for the already generous support, in the way of a £5,000 donation. We are looking forward to a prosperous future relationship working together."

The RNLI is the charity that saves lives at sea. It provides a 24-hour lifeboat search and rescue service around the coasts of the UK and Republic of Ireland, as well as a seasonal lifeguard service on many of the busiest beaches in England and Wales. The RNLI also works to promote sea and beach safety.

East Anglian Air Ambulance is a 365-day helicopter emergency medical service covering Bedfordshire, Cambridgeshire, Norfolk and Suffolk. Last year, the charity undertook nearly 2,000 rescue missions, serving an area of over 5,000 square miles, at an average cost of £3,500 per mission. Since its creation in 2000, it has attended nearly 20,000 life-saving missions, and can reach patients anywhere in East Anglia within 25 minutes.

For further information on Fred. Olsen Cruise Lines, visit the website at www.fredolsencruises.com. To find out more about the RNLI, go to www.rnli.org.uk, and learn more about the East Anglian Air Ambulance at www.eaaa.org.uk

Generous staff at Ipswich-based Fred. Olsen have chosen the three local charities that they will support over the next 12 months: Ipswich Hospital Baby Bereavement Group, Cystic Fibrosis Trust and Suffolk MIND. 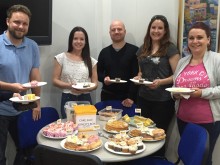