Fred. Olsen Cruise Lines is excited to announce that, in 2018/19, its fleet of four smaller, more intimate ships – Balmoral, Braemar, Boudicca and Black Watch – will be visiting no fewer than 228 destinations in 73 countries around the globe, covering 91 areas of scenic cruising, from the UK departure ports of Southampton, Dover, Liverpool, Newcastle and Edinburgh (Rosyth). Fred. Olsen’s new 2018/19 itineraries will go on general sale from 9th March 2017.

“A Fred. Olsen cruise is all about getting ‘closer’. From taking advantage of the ship’s smaller scale, to calling into destinations out of reach to larger ships, all the way through to the special, one-off itineraries and excursions that show destinations in real depth – it is part of the Fred. Olsen ethos, every step of the way!

“We are proud to have been named ‘Best for Itineraries’ by Cruise Critic’s independent experts two years in a row, and we are renowned for giving our guests a very different kind of holiday, tailoring our cruise programme to celebrate great events and festivals around the world, on over 135 different itineraries, with a variety of durations, in all the style and comfort of our more ‘human-sized’ ships.”

In 2018/19, Fred. Olsen will be making the most of its smaller-sized ships – which can sail right into the heart of the destination, where larger ships cannot reach – by featuring even more river, fjords and scenic cruising.

Fred. Olsen will also be offering guests more of its signature ‘Lochs of Scotland’ itineraries, along with its popular ‘German Waterways’ and ‘French Rivers’ sailings. Guests can also choose to cruise along theGuadalquivir River into Seville on Fred. Olsen’s 14-night ‘Authentic Andalusia & Seville Orange Blossom’ sailing on shallow-drafted Braemar in March 2018 – specially-timed to visit the city when the orange blossom is at its most fragrant – and its 14-night ‘River Cruising to Bordeaux & the Seville Fair’ itinerary in April 2018, where guests can take part in the ‘Feria de Abril’ and enjoy the spectacular fireworks, as well as spending the night in UNESCO-listed Bordeaux.

Fred. Olsen will be focussing increasingly on fly-cruise itineraries in 2018/19, with the publication of its first-ever dedicated fly-cruise brochure, highlighting new exotic holidays to Arabia and India, and growing on its best-selling ‘Indian Ocean’ itineraries – taking in some of the world’s most stunning scenery and giving guests a ‘closer’, more authentic experience in the destination.

In 2018/19, Fred. Olsen will be offering an even greater choice of shorter five-night ‘taster’ cruises – to the Norwegian fjords and along the scenic Seine – which enable new-to-cruise guests to get a feel for the three main elements of a Fred. Olsen holiday: the destination exploration, the scenic sailing, and the onboard experience; all of which combine to make a Fred. Olsen cruise such an enjoyable way to see the world!

Fred. Olsen will also be offering more ‘experience-led’ cruises than ever before – a total of 117 in 2018/19 –specifically ‘built’ around a key global event, such as the Edinburgh Tattoo, the ‘Northern Lights’ and New Year’s Eve in Sydney.

- Black Watch will be embarking on an epic 107-night ‘Around the World with Sydney at New Year’ ‘Grand Voyage’ from Southampton in November 2018, visiting a total of 35 ports in 22 countries. This is the first time that Fred. Olsen will be offering guests the chance to spend New Year’s Eve in Sydney, Australia, to take part in the world’s largest and most lavish celebrations.

- Balmoral will be undertaking her first-ever ‘California, Mexico & the Panama Canal’ adventure from Southampton in January 2019. This very special 62-night cruise will visit San Francisco, Los Angeles and San Diego, along the Californian ‘Gold Coast’, with the chance to see some of the best attractions, such as the Golden Gate Bridge, Balboa Park, Alcatraz, Beverly Hills, Rodeo Drive and the Hollywood ‘Walk of Fame’. This ‘once-in-a-lifetime’ voyage also gives guests the chance to explore cities and towns in Colombia, Barbados, Portugal, Costa Rica, Aruba, and three beautiful beach resorts on the Mexican Riviera, as well as transiting the mighty Panama Canal twice.

- In 2018/19, Fred. Olsen’s 1,350-guest flagship, Balmoral, will be sailing from Edinburgh (Rosyth)for the first time ever, with a total of nine cruises. Cruise holidays on offer to Scottish guests include a five-night ‘Norwegian Fjords’ departure; a 14-night ‘Scandinavia & St. Petersburg’ Baltic discovery; and a nine-night ‘German Waterways’ experience.

- A repeat of Fred. Olsen’s ground-breaking ‘You Choose Your Cruise’ concept, on Braemar in May 2018, where guests vote for the next port of call as the cruise progresses, from two choices each time. Guests can opt for Amsterdam versus Rotterdam (the ‘Dutch vote’), Copenhagen versus Hundested (the ‘Danish vote’), Tallinn versus Saaremaa (the ‘Estonian vote’), Helsinki versus Kotka (the ‘Finnish vote’), and Traveműnde versus Wismar (the ‘German vote’)! In addition to the five ports of call, guests can also enjoy a two-night stay in St. Petersburg, the ‘Gem of the Baltic’.

- Fred. Olsen’s ‘Captains in Cádiz’ event, taking place in the Andalucían city on 10th September 2018, will see all four ships reuniting once again, to mark the 170th anniversary of Fred. Olsen’s beginnings in the shipping industry. This follows on from Fred. Olsen’s hugely-successful ‘Four Ships in Bergen’ event in July 2015, when the Fred. Olsen fleet came together for the very first time. All four Fred Olsen ships will be operating on different schedules: Balmoral will be on a 14-night ‘Cities of Spain, Portugal & Morocco’ cruise; Braemar on a 14-night ‘Authentic Andalusia’ itinerary; Boudicca on a15-night ‘Island-Hopping to Petra’ sailing; and Black Watch on a 14-night ‘Islands of the Azores & Madeira’ voyage.

- Fred. Olsen will continue to build on its reputation as THE ‘Fjords Specialist’, taking guests to uncover the best fjords in the world! In 2018/19, as well as its award-winning ‘Norwegian Fjords’ experience, Fred. Olsen will also be exploring the ‘Fjords of Greenland’, on Boudicca for 16 nights in August 2018, and offering its first-ever shore excursion to the little-known ‘Fjords of Musandam’ in Oman, by authentic dhow boat, on Boudicca’s 14-night ‘Arabian’ fly-cruise in September 2018.

- Explore snow-capped mountains, glaciers and elusive wildlife on Black Watch’s 15-night ‘Exploring Remote Spitsbergen’ cruise in June 2018, with a call to Pyramiden, once a thriving Russian mining town, now eerie and deserted – and Longyearbyen, from where guests can go Summer dog-sledding.

- Boudicca will be taking in the very best of colourful and cultural India on a 14-night ‘Authentic India’ fly-cruise in October 2018, visiting Kochi, Porbandar, Mumbai, Goa and Vizhinjam (Thirupananthapuram), all between calls into Dubai and Colombo.

- Discover the ‘Rome, Amalfi, Tuscany & Italian Riviera’ on an in-depth 22-night sailing on Boudicca in May and June 2018, around some of the most dramatic and beguiling coastline anywhere in the world. Guests will also be able to take in the historic and cultural delights of Naples, for Pompeii, Vesuvius and Sorrento; Civitavecchia, for Rome; Livorno, for Florence and Pisa; as well as Genoa, Portofino and luxurious Sanremo.

For further information on Fred. Olsen Cruise Lines, visit the website at www.fredolsencruises.com or call 0800 0355 242. 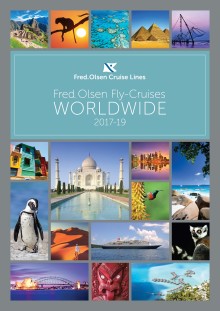 Fred. Olsen Cruise Lines has launched its first-ever dedicated fly-cruise brochure for 2017-19, highlighting a host of new exotic holidays to experience some of the world’s most stunning scenery.