Guests can even follow in the footsteps of international film star Ben Stiller, who shot many scenes in his latest hit movie, ‘The Secret Life of Walter Mitty’, in Iceland – Fred. Olsen will be offering a fascinating 14-night cruise adventure to Iceland and Norway from Bristol (Avonmouth) in June 2014.

“We are pleased to be giving guests in the South West and Wales the chance to cruise with us from right on their doorstep, with a choice of four sailings for this inaugural turnaround season from Avonmouth. We know that our guests appreciate the ease and convenience of travelling on holiday from close to home, and we hope that as many local people as possible will take up this opportunity to explore the world from Avonmouth with Fred. Olsen Cruise Lines!”

“As The Bristol Cruise Terminal enters its second season of operation in 2014, The Bristol Port Company is looking forward to welcoming Fred. Olsen Cruise Lines into the Port and this being the start of a long relationship between our two companies. The Bristol Cruise Terminal proved a great success with passengers in 2013 due to its easy access off the M5 motorway, giving passengers from the South West and Wales a convenient option for going on a cruise.”

Fred. Olsen’s four cruises from Bristol (Avonmouth) on board Boudicca in 2014 will be as follows:

Leixoes (Portugal) is the first port of call, and Portugal’s second largest city, Oporto, is just a short drive away. This hilly city is full of narrow alleyways, green squares and wide boulevards.

Boudicca continues to Funchal, on the beautiful ‘Garden Isle’ of Madeira (Portugal). It is easy to see why it is so-named, with stunning gardens full of year-round blooms and numerous parks.

After stops at pretty Valle Gran Rey and San Sebastian on the island of La Gomera, the cruise moves on to Santa Cruz in Tenerife, where guests will have the opportunity to explore the mix of old and modern buildings, black sandy beaches or the mountainous landscape of El Teide National Park.

Las Palmas in Gran Canaria has a real mainland Spain feel to it. The Old Quarter of Vegueta is home to many bars and restaurants, but also has a beautiful beach nearby.

In Arrecife (Lanzarote), enjoy an unforgettable underwater safari, in an air-conditioned submarine.

The cruise makes a final visit to Lisbon, capital city of Portugal, which boasts an abundance of museums, or guests can opt to take in the spectacular Sintra Mountains.

This delightful cruise to France and Spain calls first at Getxo (Spain) – in Bilbao, marvel at the spectacular views from the Funicular going up Artxanda Hill, visit the world-famous Guggenheim Museum and explore the church of San Nicolas, before cruising on to La Pallice (France). From here, enjoy a tour of La Rochelle’s arcaded streets, stately mansions and ancient wooden houses.

L’orient (France) is the next port of call, which became a shipbuilding centre after merchants set up warehouses in the 17th Century. It was also a U-boat base in the Second World War.

After a stop in Malaga (Spain), Boudicca cruises to Trapani in Sicily. Many of the city’s historic buildings are Baroque, including The Church of Sant’Agostino and the Cathedral.

Next, Montenegro beckons, where the Old City in Kotor has medieval architecture, ensuring its place as a UNESCO Historical Heritage Site, and the scenery is spectacular as you cruise through the Bay of Kotor. The ‘Jewel of the Adriatic’, Croatia’s Dubrovnik, is a beautiful city and best appreciated by walking round the walls of the old town.

After an overnight stay in Koper, Slovenia, Boudicca arrives in beautiful Venice (Italy). Take a gondola along one of the many canals, stand on the Bridge of Sighs or visit St. Mark’s Basilica, with another overnight stay there is plenty of time to explore this fine city.

Following a visit to Gythion (Greece), Boudicca makes another overnight stop, this time in bustling Athens (from Piraeus). Take the opportunity to visit the Acropolis in all its glory, explore where the first modern Olympic Games was held, or enjoy an evening at a local taverna.

Iceland features prominently in actor Ben Stiller’s latest hit movie, ‘The Secret Life of Walter Mitty’, and Fred. Olsen guests are in for a treat on this Iceland and Norway adventure.

Reykjavik (Iceland) is the first port of call; as well as being able to explore this exciting city, guests can choose to venture slightly further afield to some of Iceland’s most beautiful places, including the nation’s holy place, Þingvellir, where the oldest parliament was established in 930AD.

All cruise prices shown are based on two adults sharing a twin, inside cabin, and include accommodation, all meals and entertainment, plus port dues. Guests can choose to upgrade to the ‘all-inclusive’ drinks package from just £10 per person, per night*.

Fred. Olsen is also able to offer ‘new to cruise’ guests its unique ‘Enjoyment Promise’*, which means that, if they book before 28th February 2014 and at least 14 weeks in advance, on cruises of seven nights or more (and less than 35 nights), and find that a cruise is not for them within a day or two of stepping on board, they just let the Guest Relations Manager know and Fred. Olsen will arrange and pay for their flight back to the UK and repay the cost of their cruise. 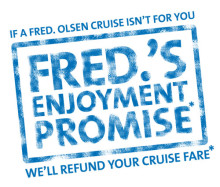