Four D-Day veterans who joined Fred. Olsen Cruise Lines on Boudicca's historic ‘D-Day 75 Voyage of Remembrance’ in June this year had their courage and sacrifice during the Second World War commended at the glittering 'Stars of Suffolk Awards 2019', held at Greshams Ipswich on 7th November 2019.

The annual 'Stars of Suffolk Awards’ celebrate unsung heroes from across the county, from carers to police men and women and those who have shown great bravery.

This year, a ‘Judges’ Special Award' was incorporated into proceedings, in association with Suffolk-based Fred. Olsen Cruise Lines, to celebrate the bravery and sacrifices made by those who were involved in the Normandy landings.

Suffolk D-Day veterans James Perry, Tony Pyatt, Francis Grant and Douglas Smith - all of whom joined The Royal British Legion's momentous ‘D-Day 75 Voyage of Remembrance’ on board Fred. Olsen's Boudicca in June - took centre stage to receive the surprise commendation, on behalf of all those who took to the Normandy beaches that fateful day, 75 years ago. 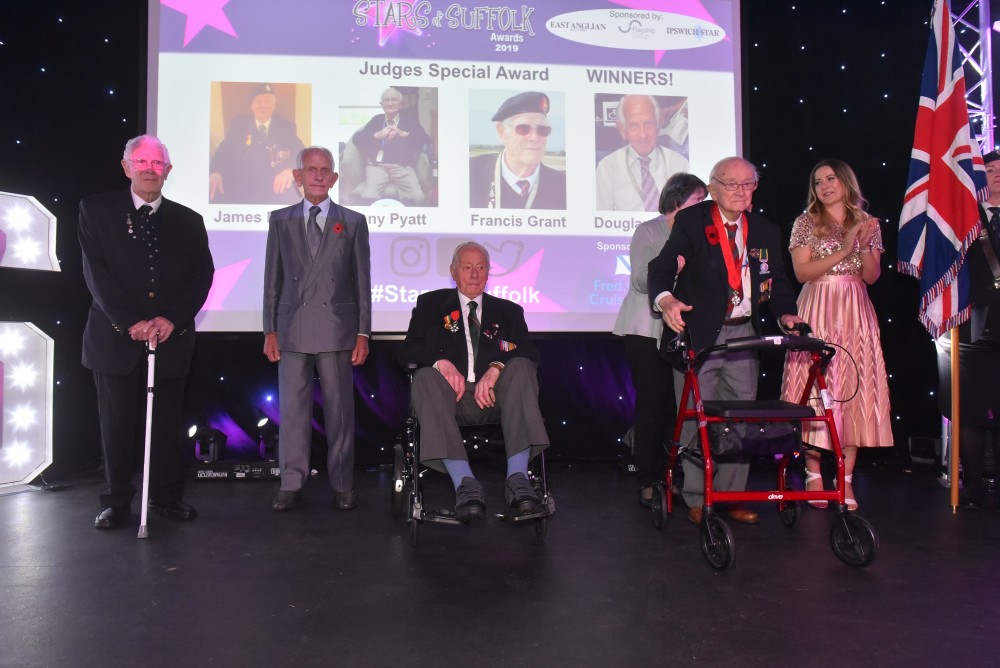 Douglas Smith, 98, who served as a bomber during the Second World War, told the audience how a stay in hospital with tonsillitis saved his life, as the rest of his crew sadly never returned from their mission that night.

“The rest of my crew went and, sadly to say, they did not come back,” he said. “I'd like to pay tribute to those guys."

“I had the privilege of joining these gentlemen aboard Boudicca back in June, listening to their incredible stories and attending the many commemorative events, and it was our honour as a company to help these deserving D-Day veterans to return to the shores of Normandy.

"All of us on board Boudicca will never forget the moving reception that these heroes received, with crowds lining the shores, some holding signs saying ‘Thank you’, applauding and cheering everywhere that we went. This was replicated on stage at the Awards, when our Suffolk veterans received a standing ovation, with barely a dry eye in the room."

“The impact that the veterans had this year on Stars of Suffolk 2019 was absolutely incredible. The audience were in awe of these gentlemen and the stories that they shared on the night and to bring an evening like that to a close with a standing ovation for the veterans was the perfect crescendo.”

The Voyage was offered free to veterans and their companions, funded by The Royal British Legion’s LIBOR grant, in conjunction with the Ministry of Defence and Arena Travel.

The Voyage headed first to Dunkirk, France, before calling into Poole, and then onto Portsmouth for the UK's major commemorative event to mark the 75th anniversary of the Normandy Landings, fought on the five beaches of ‘Gold’, ‘Sword’, ‘Juno’, ‘Omaha’ and ‘Utah’, on 6th June 1944.

From there, Boudicca followed the same route as those involved in the 'Battle of Normandy', travelling to Le Havre, France, for a special Commemoration Service at the Bayeux Commonwealth War Graves Commission Cemetery on 6th June, exactly 75 years after the D-Day Landings.

To find out more about the historic 'D-Day 75 Voyage of Remembrance', visit https://www.fredolsencruises.com/royal-british-legion-d-day-voyage