Fred. Olsen Cruise Lines hosted the first-ever game of ‘Walking Football at Sea’ yesterday [31st October 2016], when 804-guest ship Black Watch called at Harwich – the closest port to the cruise line's Head Office in Ipswich, Suffolk. The event, which was held in partnership with the Suffolk Football Association ('Suffolk FA') – co-ordinators of Walking Football across the county –, saw ten players take part in a 45-minute game on the ship’s top deck, Sun Deck 10.

As well as enjoying a tour of Black Watch, the Walking Football players and Suffolk FA staff were also hosted by the ship's Cruise Director, Simon Vickers‎, in the impressive Observatory Lounge, for a VIP Reception, where discussions were had on the many benefits of Walking Football.

The sport is now played at 13 venues across Suffolk – from Felixstowe in the east, to Lowestoft in the north, and Newmarket in the west. Primarily played by men and women over 50, the game is ideal for those looking for a lower impact activity, and is designed to help people maintain an active lifestyle, irrespective of their age, as well as assisting those who have had to stop playing through injury.

“It was fantastic to take Walking Football 'to sea' for the very first time yesterday. The event was a great opportunity for us to bring this unique and popular sport to our cruise guests through Black Watch's Cruise Director and Entertainments Team, who thoroughly enjoyed the day and will be investigating further whether Walking Football can be introduced on board.

"There is a natural link between our customer base and the Walking Football community; plus, as a fellow Suffolk organisation, we value the importance of being involved with such an important local resource for the county.”

“The guys who participate in the ActivLives Walking Football sessions and agreed to take part in the demonstration match yesterday on board Black Watch had a fantastic time.

“Once they mastered the size of the pitch and surface, which were quite different to the sports halls they are more accustomed to at Gainsborough and Whitton Sports Centres in Ipswich, they revelled in the conditions. They enjoyed themselves so much that at the end they were asking when they could come back and play again!

“Suffolk FA would like to thank Fred. Olsen Cruise Lines for organising the first-ever Walking Football match to take place at sea and giving the players a great football experience. We hope that Walking Football is something that Fred. Olsen Cruise Lines are able to introduce on their ships in the future so that their guests can experience this great game.”

All players that attended the ‘Walking Football at Sea’ event on 31st October 2016 attend weekly sessions organised by ActivIpswich, which is a physical activity initiative that works with people who are 45 years and over. The project is a partnership between ActivLives and Ipswich Borough Council and is funded by Sport England and the National Lottery.

Photo Caption One: Suffolk’s Walking Football players celebrate taking part in the first ever game of ‘Walking Football at Sea’ on board Fred. Olsen Cruise Lines’ Black Watch, when she was docked in Harwich on 31st October 2016.

To watch the video of the ‘Walking Football at Sea’ event, please follow this link: http://media.fredolsencruises.com/videos/fred-olsen-cruise-lines-and-the-suffolk-football-association-host-a-successful-game-of-walking-football-at-sea-for-the-first-time-ever-25902 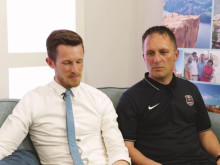 Fred. Olsen Cruise Lines' Ruth Burton meets Nathan French and Gary Pinyoun from the Suffolk FA to find out more about why the two organis... 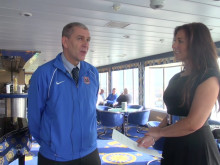