This ‘4 Bs in Bergen’ event – named after the initial letter of each of the four Fred. Olsen ships – will be the first time ever that the fleet has converged in one place, anywhere in the world, and it is expected to be a very exciting day for both Fred. Olsen guests – of which there will be nearly 4,000 visiting that day – and the city of Bergen.

Fred. Olsen is renowned for its proud Norwegian heritage. The Fred. Olsen Company originated in the small village of Hvitsten, outside Oslo, in 1848, when three Olsen brothers – Fredrik Christian, Petter and Andreas – bought their first ships and began an international shipping company. Now into the fifth generation of the family, there is no better way to experience all the wonders that Norway has to offer than on a Fred. Olsen cruise!

“This is a very special occasion for Fred. Olsen Cruise Lines, and we know that the city of Bergen is looking forward to welcoming our fleet on this unique day.

“At Fred. Olsen, we are committed to the city of Bergen – known as the ‘Gateway to the Fjords’ – on our Norwegian cruise itineraries. The Olsen association with Bergen can be traced a long way back, probably as far as the original Olsen brothers themselves, and we shared in a very successful partnership with Bergen Line during the 1960s and 1970s.

“In fact, the number of days that Fred. Olsen ships have spent in Bergen from 2006 to 2015 is 176 in total, and we know that the city is a highlight to many of our guests on cruises to our historic homeland.”

All four ships will be arriving at the Port of Bergen at 8am on 28th July 2015, and will be departing at 6pm. They will be operating on the following schedules:

The festivities on the day will include:

- Norwegian-themed marching bands, drummers and singers on the quayside

- a fantastic schedule of onboard entertainment – an afternoon show, deck party and live bands – to be co-ordinated so that all guests will have a chance to watch different shows across the different ships

- the chance to visit all four ships as they are berthed along the quayside, with complimentary drinks and canapés

- an inter-ship Treasure Hunt, where teams will compete against each other to complete the course around the beautiful city of Bergen in the fastest time and win a £200 gift voucher for a future Fred. Olsen cruise for everyone on the winning ship

- an action-packed inter-ship ‘Tug of War’ challenge on Festningskaien, as small teams of crew from each ship battle it out, spurred on by vocal support from guests!

- a spectacular ‘water cannon’ send–off, as all four ships leave the Port in an impressive ‘diamond’ formation. Flagship Balmoral will depart first, followed by Braemar, Boudicca and Black Watch – all in size order!

Guests will also be able to book the following shore excursions as part of this very special one-off experience:

- a new walking tour, which will visit the Bergenhus Fortress, historic Bryggen and Ole Bull statue

- a boat trip across the harbour, to the island of Lygra, which will allow guests to see all four ships from the water

- a helicopter tour to see all four ships from above

- a Mount Fløyen funicular tour, with the emphasis on the view of the ships from the impressive summit

In 2015, Fred. Olsen will be celebrating a total number of 17 cruise calls for the year, comprising visits by nearly 17,000 guests. Balmoral, Boudicca and Black Watch will be making four calls each, and Braemar will be making five.

For regular updates on the event and to get involved in the discussions, visit the Facebook page at www.facebook.com/fredolsencruiselines

For further information on Fred. Olsen Cruise Lines, visit the website at www.fredolsencruises.com To find out more about Bergen, visit www.visitBergen.com 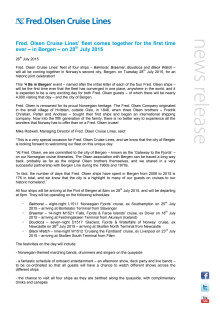