“We are very excited to be basing Balmoral in Newcastle from May to August in 2016, as it means that we are almost doubling our capacity and offering our loyal guests in the North East an even greater number of cruise departures than ever before, with a choice of 11 in total. Bookings for 2016 have shown that, so far, our 14-night ‘The Wonders of Spitsbergen’ and 11-night ‘Icelandic Wildlife, Falls & Hot Springs’ cruises are bestsellers.

“The Port of Tyne is also ideally placed for our ever-popular Norway, Scandinavian and Baltic itineraries, and we can save up to three days’ cruising time sailing from Newcastle to Norway than from Southern ports.”

The appealing combination of choice and value offered by Fred. Olsen has already seen many first-time cruisers and repeat customers from the North East region make the decision to use their local port and sail from the Port of Tyne.

Research shows that guests from the North East rate the choice of destination as the most compelling factor when booking a cruise with Fred. Olsen. As a result, in 2016, guests can choose from a wider selection of destinations sailing directly from the Port of Tyne, including the cooler climes of Norway, Scandinavia and the Baltics, to the warmer shores of the Canary Islands, Madeira, the Azores, Portugal, Morocco and Spain.

In 2016/17, Fred. Olsen's Balmoral will be setting sailfrom Newcastle for the first time ever, with a record 11 departures, representing a 45% increase in capacity from the Port of Tyne.

Balmoral’s cruise season from Newcastle will commence on 21st May 2016, with a five-night ‘Norwegian Festival & Fjords’ cruise. Other departures include a ten-night ‘UK Castles’ sailing, which offers guests the chance to visit Balmoral and Braemar Castles - both of which lend their names to Fred. Olsen ships - and an 11-night ‘Spain, Portugal & Guernsey’ getaway.

“The Port of Tyne’s cruise operations continue to grow and it is great news that Fred. Olsen Cruise Lines are expanding their itineraries and basing their flagship at the Port from next year.

“Fred. Olsen is one of many leading cruise lines operating from the Port of Tyne and, in 2015, the Port has 27 cruise calls planned during the year. 2016 promises to be a record year for cruise calls.”

Fred. Olsen's 880-guest Boudicca is today [7th May 2015] heralding the first of its calls into the Port of Tyne for 2015, on an 11-night ‘Floral Britannia’ itinerary. This floral-themed sailing, which departed from Dover on 28th April 2015, will take in some of the best and most spectacular gardens and attractions in the UK, including the world-famous Alnwick Castle in Northumberland - where 'Harry Potter' was filmed - and its intriguing 'Poison Garden'.

Boudicca will return to the Port of Tyne to begin her cruise season on 26th July 2015, setting sail on a total of eight cruises, including a 16-night ‘Canaries, Madeira & the Azores’ sunshine escape, a nine-night ‘Norwegian Fjords’ cruise and a 13-night ‘Scandinavia & St. Petersburg’ departure.

The Port of Tyne’s International Passenger Terminal (based in North Shields, eight miles from Newcastle City Centre) welcomes around 620,000 passengers each year. Passenger shipping generates around £60 million for the North East economy each year, supporting over 2,000 tourism-related jobs.

For further information on Fred. Olsen Cruise Lines, visit the website at www.fredolsencruises.com To find out more about the Port of Tyne, go to www.portoftyne.co.uk 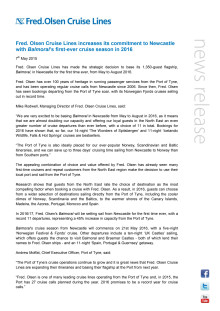