The New Year may barely be upon us, but 2019 is already a year to remember for one Fred. Olsen stalwart who has been made a Member of the British Empire in The Queen’s New Year’s Honours List.

Jenny Mullan has been awarded an MBE for services to Scouting and young people in Suffolk, having been involved in Scouting movements across the country – and even further afield in Europe – for more than 40 years.

Jenny, who has worked as a receptionist for Fred. Olsen for 15 years, was notified of her achievement in late November, but was under strict instruction not to share her news until the list had been officially released in late December.

Revealing how it felt to receive the news, Jenny said:

“I opened the letter and thought ‘what? Wow!’ It was quite emotional. I couldn’t believe it.

“I thought nobody would play a prank like that, and at the back of my mind I thought ‘this could be true’.

“I have been involved in Scouting and working with young people for over 40 years, and I’m getting this award having had the time of my life. I have loved it!” 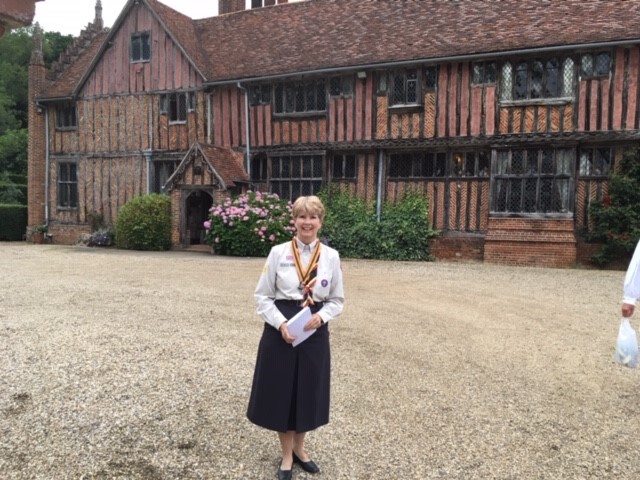 Jenny’s first experience with Scouting was soon after she and her husband, John, moved to Machrihanish on the Mull of Kintyre in 1977, and a neighbour asked Jenny if she wanted to join in. Jenny quickly became very involved in her local Cubs group, and since then has held a number of roles in several counties, including Lincolnshire, Buckinghamshire, Berkshire and Middlesex – and even as far afield as Berlin, Germany.

Around 18 months ago she stood down from her role as County Commissioner for Suffolk and is currently Deputy District Commissioner for Sudbury. Jenny is passionate about nurturing talent, both for new and existing Scout members, and is a Director of Training for Scout Leaders.

“The activities that leaders put on for young people in the county is just mind blowing,” she said. “Scouting isn’t just about fun and adventure, it’s about equipping young people with life skills and to watch young people achieve is the greatest gift of all.

“When a young person says ‘I can’t do that’, I say ‘yes, you can, and I’m going to show you how’. It develops skills for adults, too. I have developed skills I never knew I had. This is what Scouting does.

“As a young person I always thought I wanted to be a teacher. It recently dawned on me that I have been a teacher. Scouting is an educational movement. I have so much passion for it, and that’s what makes a good teacher. It’s so easy to be passionate because I have had such a wonderful time.”

“This is a fantastic achievement, and thoroughly deserved for Jenny, who has dedicated so much of her time and energy to enriching the lives of young people right across England.

“For the past 30 years we have based our business in Ipswich, Suffolk, and to know that so many people in our county will have benefited from Jenny’s passion and dedication to Scouting is something for which we as a company are extremely proud.

“All of us here at Fred. Olsen wish Jenny every congratulations, and hope she enjoys many more happy years of Scouting to come.”

Jenny is keen to enlist as many new Scout Leaders into the organisation as possible, with thousands of young people on a waiting list to join their local groups but unable to do so due to insufficient Leader numbers.

Roles can vary from Scouting Leaders, to administration support and executive positions. For more information on how you can get involved, visit www.suffolkscouts.org.uk