This important accolade adds to Fred. Olsen recent haul of awards, as it was also voted ‘Best for Itineraries’ by Cruise Critic – for a record third consecutive year – and ‘Best Ocean Cruise Line’ by Silver Travel Advisor, the over-50s travel specialists, for the second year in a row.

The winners of the ‘UK Editors’ Picks Awards 2017’ are selected by Cruise Critic’s team of knowledgeable cruise experts, based on the lines and ships that they feel are ‘at the top of their game’, and best represent excellence in the Ocean, River and Luxury categories.

“We would like to thank the Cruise Critic judges for acknowledging our commitment to our solo guests in this significant way.

“We recognise that, for some, taking the plunge and travelling solo might seem daunting, which is why our attentive staff make guests as welcome as possible, with friendly, efficient service and attention to detail every step of the way.

“From matching up solo guests with like-minded fellow cruisers, to providing dance hosts and dance couples, and offering a great range of solo deals throughout the year, Fred. Olsen is the ideal choice for the discerning solo traveller!”

Once on board a Fred. Olsen ship, solo travellers will find gatherings exclusively for them, to enable them to get to know each other, and staff will seat them together for dinner, and arrange companions when going ashore, if required. There are also dance hosts and dance couples on board the ships to provide dancing partners for solo guests.

Fred. Olsen has a number of room options available on each of its four ships, covering all grades, from ‘Single Interior’ and ‘Single Ocean View’, to ‘Single Balcony Suites’. With 10% of all rooms in the Fred. Olsen fleet being dedicated to solo travellers, it has one of the highest proportions of dedicated accommodation for solos within the industry. Overall, the Fred. Olsen fleet has 190 dedicated rooms for solo guests: Braemar offers 40, Black Watch and Boudicca each have 43, and Balmoral has 64. 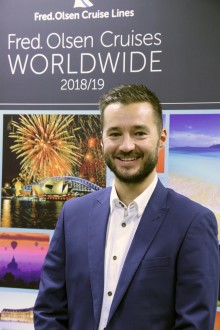