Fred. Olsen Cruise Lines is excited to announce that, in 2016/17, its fleet of four ships – Balmoral, Braemar, Boudicca and Black Watch – will be visiting no fewer than 253 destinations in 84 countries around the globe – more than ever before! The new 2016/17 itineraries will be unveiled to existing guests today [5th March 2015], and will go on general sale from 10th March 2015.

In 2016/17, Fred. Olsen’s 1,350-guest flagship, Balmoral, will be sailing from Newcastlefor the first time ever, with a record 11 departures, representing a 45% increase in capacity from the port. Departures include: a five-night ‘Norwegian Festival & Fjords’ cruise, visiting Bergen during the ‘International Festival‘; a 10-night ‘UK Castles’ sailing, offering guests the chance to visit Balmoral and Braemar Castles, both of which lend their names to Fred. Olsen ships; and an 11-night ‘Spain, Portugal & Guernsey’ cruise.

Fred. Olsen’s Boudicca will also be cruising from the port of Falmouth for the first time in 2016/17 – offering guests in the South West of the UK a 12-night ‘Canaries & Portugal Spring Break’ (18+ only) and a ten-night ‘Land’s End to John O’Groats’ voyage.

Fred. Olsen will be reconfirming its commitment to the port of Liverpoolin 2016/17, with a total of 15 cruise calls on board Boudicca, including a 16-night ‘Rugged & Rural Canada’ journey and an 18-night ‘Canaries Christmas & Funchal Fireworks’ sailing.

Fred. Olsen will also be reinforcing its reputation as the ‘local, global cruise line of choice’ in 2016/17 with a 50% increase in sailings from Tilbury on Black Watch, with a total of six departures, including an adults-only nine-night ‘Cruising the Fjordland’ voyage and a seven-night ‘European Cities & Waterways’ experience. Fred. Olsen will also be offering a total of six cruises on Black Watch from Rosyth (Edinburgh) in 2016/17, including a nine-night ‘A Taste of Iceland’ cruise and a 13-night ‘Scandinavian Capitals & St. Petersburg’ sailing.

Fred. Olsen will be offering a further 18 ‘18+’ cruises in 2016/17, for guests who would rather cruise with people of a similar age. These adults-only voyages include Braemar’s 11-night ‘Great British Cruise’, for tours to the award-winning Eden Project and the Lost Gardens of Heligan from Falmouth, a call in The Beatles’ home city of Liverpool, and the chance to sample the UK’s ‘official’ best fish and chips with a visit to Lerwick, in the Shetland Islands; guests can also choose to enjoy all the pomp and pageantry of Edinburgh’s spectacular ‘Military Tattoo’.

“For 2016/17, we have a clear focus on ‘Bringing the world closer to you’, offering innovative cruise experiences that stand out, to destinations that our guests really want to explore and enjoy. We are ‘closer’ to the market, with more regional departures; ‘closer’ to the destination, with our smaller, more intimate cruise ships; ‘closer’ to our global partners, offering our guests the best possible experiences in ports around the world; and we are ‘closer’ to our guests, with award-winning customer service across our fleet.

“Our focus on ‘closer to you’ will be enhanced significantly in 2016/17, with Balmoral’s deployment to the Port of Tyne in Newcastle, where we have a rapidly-expanding and very loyal cruise market. Historically, this is a very important port for Fred. Olsen, as Newcastle is where we built a dedicated Fred. Olsen terminal and started sailing from in 1906.

“2015 is also a very special year for Fred. Olsen Cruise Lines, as it is the 200th anniversary of the first ‘Fred. Olsen’ – Mr. Fredrik Christian Olsen, the founding father of our company – and so we are taking this opportunity to celebrate our history and heritage. Mr. Olsen was born in 1815 and started the Fred. Olsen Company in 1848; we have been a world-leading shipping and cruise company ever since.”

Fred. Olsen’s Black Watch and Boudicca will be embarking on two epic ‘Grand Voyages’ in January 2017, visiting a total of 67 ports in 38 countries between them. Black Watch will be taking in the exotic destinations of Hanga Roa (Easter Island), Bora Bora, in French Polynesia, and three stops in New Zealand – Auckland, Tauranga and Wellington – on a 107-night ‘Around the World’ cruise. Boudicca will be offering a 77-night ‘South American Discovery’, which includes stops in Brazil’s Rio de Janeiroand Buenos Aires, in Argentina, as well a cruise of the Chilean fjords and a maiden call at Laguna San Rafael.

In 2016/17, Fred. Olsen will be making the most of its smaller, more intimate ships by offering even more river, fjord and scenic cruising, taking guests along narrow sea passages and waterways, and past awe-inspiring scenery. Fred. Olsen will be visiting 84 picturesque scenic sea passages and waterways in 2016/17, including the 350-mile Strait of Magellan, in Chile, which links the Atlantic and Pacific Oceans; Loch Fyne, one of the longest and finest sea lochs; the beautiful Bay of Kotor in Montenegro; and the winding and mysterious Stockholm archipelago. Fred. Olsen’s fleet will also be sailing right into the heart of cities and towns, such as Portoferraio, on the Italian island of Elba, Seville, in Spain, and Bordeaux, in France.

Highlights of Fred. Olsen’s new 2016/17 cruise programme are as follows:

- Following its tremendous popularity in 2015, Fred. Olsen will also be offering another ‘Arctic Explorer’ cruise, exclusively for adults. Black Watch will visit the remote lands of Greenland and Svalbard, as well as Iceland and Norway.

- Braemar will be serving Southampton in 2016/17, offering smaller-ship cruising to the UK cruise market on a variety of itineraries, including a 14-night ‘Cruising the Waterways of Scandinavia’ voyage, and a three-night ‘Rouen & the Seine River Mini-Cruise’.

- Fred. Olsen will be building upon its reputation as THE ‘Fjords Specialist’, with a 15-night ‘Exploring the Fjords of Greenland’ adventure, taking in over 16 hours of scenic cruising through Greenland’s fjords, as well as stopping in Tasiilaq, a maiden call for Fred. Olsen.

- Fred. Olsen will be offering its first-ever ‘Norwegian Fjords’ cruise with a duration of just five nights; sailing from the Northern port of Newcastle will give guests the chance to enjoy such a short ‘taster’ break. The cruise will take in Bergen and Eidfjord, as well as two days of scenic cruising, through the mighty Lysefjord – one of the ‘pearls of Norway’, featuring ‘Preikestolen’ (‘Pulpit Rock’) and ‘Kjerag’ (‘The Mountain Bolt’).

- Yet another ‘first for Fred.’ – a nine-night ‘Maiden Call Mystery Cruise’, where every destination that Braemar visits is a maiden port of call! All that guests will know is that this ‘cruise to the unknown’ will take in six destinations, four countries and five UNESCO World Heritage Sites.

- Two fantastic US adventures on board Balmoral; a 34-night ‘Old England to New England’ sailing, which incorporates two calls in Bermuda, six American states, three maiden calls and three overnight stays – including Boston and the ‘Big Apple’; or a 46-night ‘Central America & the Mardi Gras’ cruise, where guests can visit the NASA rocket launch sites, enjoy traditional Southern hospitality and join in the fun at the colourful and vibrant ‘Mardi Gras’ in New Orleans.

- Fred. Olsen will be offering 14 Mediterranean cruises in 2016/17, including a stunning 16-night ‘Barcelona, Monaco & the Island of Elba’ cruise on board Braemar, plus a chance to see the Monaco F1 Grand Prix on board Black Watch’s 15-night ‘Sun, Sea & Monaco Grand Prix’ cruise.

- Even more cruises around the UK and Ireland, including Balmoral’s seven-night ‘Easter Ireland’ sailing around Northern and Southern Ireland, and an 11-night ‘Tinsel & Hogmanay’ cruise on Black Watch, offering guests an unforgettable Christmas at sea and Hogmanay celebrations in Edinburgh – with the added benefit that those who do not hold a passport can still join the ship with a valid form of photo identification.

- Explore snow-capped mountains, glaciers and elusive wildlife on Balmoral’s 14-night ‘The Wonders of Spitsbergen’ cruise, with a maiden call to Pyramiden, in Spitsbergen (where the new Sky Atlantic blockbuster ‘Fortitude’ is based), which was once a Russian mining town, but is now eerie and deserted.

- Back by popular demand is Fred. Olsen’s 10-night ‘German Waterways’ cruise, which will sail along three German rivers – the Elbe, the Weser and the Trave – as well as taking in a canal and a fjord. 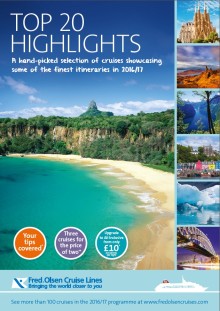 Fred. Olsen Cruise Lines is celebrating breaking its record for the highest-selling day ever, taking an amazing £2.1 million in revenue on Friday 6th March 2015, following the launch of its new 2016/17 cruise programme, which went on sale on 5th March 2015.