Fred. Olsen Cruise Lines will be commencing its first-ever season of cruises from Bristol (Avonmouth) in 2014, offering four cruises on 880-guest Boudicca to ‘Canaries & Portugal’, ‘France & Spain’, ‘Undiscovered Adriatic’ and ‘Iceland & Norwegian Fjords’, from April to June. To celebrate this inaugural cruise season, Fred. Olsen is offering guests the chance to start their holiday early with a free overnight stay at the Bristol Marriott Hotel, including breakfast and car parking for one car, and tickets to Brunel’s ss Great Britain*. To secure this fantastic package – which is available for the first 40 bookings only, on the 28-night ‘Undiscovered Adriatic’ cruise, D1408, departing on 17th May 2014, or 14-night ‘Discover Iceland & Norway’ voyage, D1409, departing on 14th June 2014 – guests must quote ‘BRS2014’ at the time of booking, up until 31st March 2014.

For guests booking on the ‘Undiscovered Adriatic’ cruise, an alternative free offer is also available; guests can select from either a free door-to-door transfer service** or an onboard spending credit of £150**, instead of the hotel stay and ss Great Britain tickets.

The Bristol Marriott Hotel is in the heart of Bristol city centre, allowing guests to explore this cosmopolitan area fully. In addition, Fred. Olsen is also offering guests free tickets to Brunel’s iconic ss Great Britain, one of the UK’s number one attractions, drawing in nearly 200,000 visitors a year. Famously the largest passenger ship in the world when it was launched in Bristol 1843, and one of the first iron steamers to cross the Atlantic – taking 14 days – the ship now proudly resides in its home city. A part of the National Historic Fleet’s Core Collection, a visit to this award-winning museum at Bristol Harbour is the perfect day out, before boarding Fred. Olsen’s stylish Boudicca.

The two Fred. Olsen cruises that are available from Bristol with the free hotel stay and ss Great Britain ticket promotion are:

After a first call in Malaga (Spain), Boudicca cruises to Trapani in Sicily. Many of the city’s historic buildings are Baroque, including The Church of Sant’ Agostino and the Cathedral.

Next, Montenegro beckons, where the Old City in Kotor has medieval architecture, ensuring its place as a UNESCO Historical Heritage Site, and the scenery is spectacular as you cruise through the magnificent Bay of Kotor. The ‘Jewel of the Adriatic’, Croatia’s Dubrovnik, is a beautiful city and best appreciated by walking round the walls of the Old Town.

After an overnight stay in Koper, Slovenia, Boudicca arrives in beautiful Venice (Italy), where Fred. Olsen smaller-sized ships can still call. Take a gondola along one of the many canals, stand on the ‘Bridge of Sighs’ or visit St. Mark’s Basilica; with another overnight stay, there is plenty of time to explore this fine city, rated as one of Fred. Olsen guests’ favourites.

Following a visit to Gythion (Greece), Boudicca makes another overnight stopover, this time in bustling Athens (from Piraeus). Take the opportunity to visit the Acropolis in all its glory, explore where the first modern Olympic Games was held, or enjoy an evening at a local taverna.

Reykjavik (Iceland) is the first port of call on this cruise; as well as being able to explore this exciting city, guests can choose to venture slightly further afield to some of Iceland’s most beautiful places, including the nation’s holy place, Þingvellir, where the oldest parliament was established in 930AD.

All prices shown are based on two adults sharing a twin, inside cabin, and include accommodation, all meals and entertainment, plus port dues. Guests can choose to upgrade to Fred. Olsen’s ‘all-inclusive’ drinks package from just £10 per person, per night**.

*One room per booking and must be used the day before you cruise.

Fred. Olsen Cruise Lines will be commencing its first-ever season of cruises from Bristol (Avonmouth) in 2014, offering four cruises on 880-guest Boudicca to ‘Canaries & Portugal’, ‘France & Spain’, ‘Undiscovered Adriatic’ and ‘Iceland & Norwegian Fjords’, from April to June. To celebrate this inaugural cruise season, Fred. Olsen is offering guests the chance to start their holiday early with... 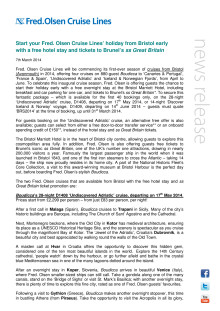 Fred. Olsen Cruise Lines will be commencing its first-ever season of cruises from Bristol (Avonmouth) in 2014, offering four cruises on 880-guest Boudicca to ‘Canaries & Portugal’, ‘France & Spain’, ‘Undiscovered Adriatic’ and ‘Iceland & Norwegian Fjords’, from April to June. To celebrate this inaugural cruise season, Fred. Olsen is offering guests the chance to start their holiday early with...