Fred. Olsen Cruise Lines has brought together its superb offering of world cruises and longer voyages for 2014/15 in a single brochure of ‘once in a lifetime’ cruises. The ‘Grand Voyages 2014/15’ brochure features Balmoral’s epic 104-night ‘Around the World with Burma, Japan, Hawaii & Latin America’ cruise in 2014, and Black Watch’s 114-night ‘South America and Australasia World Voyage’, visiting Latin America, Australia, New Zealand and the Far East – becoming Fred. Olsen’s longest-ever cruise. Also featured are itineraries for 2015, with each ship cruising in a different direction, to some of the world’s most exciting destinations.

“These are undoubtedly the most adventurous itineraries that we have ever launched, to many ports we have not visited before, and reflect our guests’ wishes to explore the world and spend more time in the destination. The value for money of a Fred. Olsen ‘Grand Voyage’ is remarkable when you consider all that is included and the range of choices.”

All of Fred. Olsen’s ‘Grand Voyage’ cruises in 2014/15 can be booked in shorter sections as ‘Exotic Fly-Cruises’.

Cruise sectors can also booked on a cruise-only.

For Black Watch’s 2014 W1401 ‘South America & Australasia World Voyage’, prices start from £9,469 per person. A free Insurance Offer is available on Outside and Superior Outside cabins.**

For Black Watch’s ‘South American Discoverer’ cruise W1501, prices start from £6,599 per person, with up to £400 free onboard spending credit per person.**

All prices are based on two adults sharing twin accommodation and include all meals and entertainment on board and port taxes; in the case of fly-cruises, they also include flights, transfers and airport taxes.

Fred. Olsen was recently voted one of the Top 10 holiday providers in a Which? consumer survey http://www.which.co.uk/media/popup/table-popup-holiday-companies--2013-323783.html

*For a preview of a Fred. Olsen Cruise Lines’ ‘Grand Voyage’, following the work of The Mission to Seafarers’ Chaplain Reverend Colin Still on board Balmoral’s 2013 ‘World Cruise’, tune into the BBC’s ‘The Cruise: A Life at Sea’ series on BBC2 from 9th July 2013 at 8.30pm. You can learn more at http://www.bbc.co.uk/programmes/b036ypxj

** Subject to availability. See full Terms and Conditions at www.fredolsencruises.com

Whilst most of Fred. Olsen Cruise Lines’ voyages are around a week or fortnight in length, the cruise line also offers selected longer departures, for guests with the time and curiosity to explore a bit further afield and discover even more new and exciting ports around the world. Amongst the new 2015 voyages are two brand new cruise itineraries to spectacular Canada and the mighty USA. 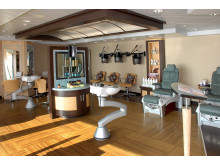 Balmoral is our largest and newest cruise ship, named after the Scottish home of the Royal Family. Still smaller than most cruise ships t...

Fred. Olsen Cruise Lines has brought together its superb offering of world cruises and longer voyages for 2014/15 in a single brochure of ‘once in a lifetime’ cruises. 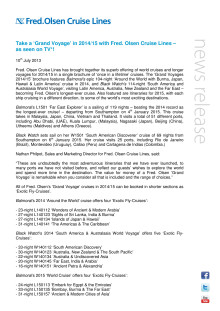 Fred. Olsen Cruise Lines has brought together its superb offering of world cruises and longer voyages for 2014/15 in a single brochure of ‘once in a lifetime’ cruises.