Sky Atlantic’s highly-acclaimed psychological thriller, ‘Fortitude’ – set in Pyramiden, Spitsbergen, the fictional Arctic settlement of Fortitude – has been helping to ‘drive sales North’ at Fred. Olsen Cruise Lines, as Spitsbergen, Greenland and Iceland are amongst the top-selling itineraries for 2016.

In its 2016/17 cruise programme, Fred. Olsen is offering guests the chance to visit this fascinating region on five different cruises, including Balmoral’s 14-night L1615 ‘The Wonders of Spitsbergen’ sailing, to explore the snow-capped mountains, glaciers and elusive wildlife of Svalbard, the Norwegian archipelago in the Arctic Ocean.

Another highlight of Fred. Olsen’s 2016 itineraries is its 15-night D1615 ‘Exploring the Fjords of Greenland’ adventure on board Boudicca, for adults only.

“There is an increasing trend amongst holiday-makers to want to visit the set of their favourite TV series and films, and Fred. Olsen’s range of Spitsbergen, Greenland and Iceland cruises in 2016 is proving particularly attractive to these ‘set-jetters’, as they are known, where they can visit the fictional settlement and filming location of their favourite TV programme, ‘Fortitude’.

“We have seen record-breaking sales in March this year, following the launch of our new 2016/17 itineraries, which feature cruises that take in unique and lesser-known destinations; a trip to these isolated locations is a truly breathtaking experience, for seasoned travellers, artists, photographers and wildlife enthusiasts alike.”

In recent years, Ben Stiller’s hit movie, ‘The Secret Life of Walter Mitty’, has also served to heighten interest in Iceland, were the country features prominently, also acting as a stand-in for Greenland and Afghanistan. In Sky Atlantic’s TV smash ‘Game of Thrones’, Iceland also doubles as the fictional continent of ‘Westeros’.

In 2016, Fred. Olsen will be offering the following Spitsbergen, Greenland and Iceland cruises, all accessible from the North of the UK:

Sail right into the heart of arguably Europe’s most picturesque country, admire the natural landscapes of Norwegian Fjords and enjoy a number of once-in-a-lifetime experiences.

Following a first call at the Art-Nouveau town of Ålesund, Balmoral continues to Tromsø, known as the ‘Gateway to the Arctic’, where guests can take part in the unique Neptune line-crossing ceremony on board the ship, as they cross the Arctic Circle.

The cruise then calls at Honningsvåg, in the North Cape, Europe’s most northerly point, en route to Spitsbergen, in the spellbinding Svalbard archipelago.

Visit Pyramiden – an abandoned Russian coal mining town – to explore the untouched and eerily-deserted settlement; go in search of native wildlife in the Arctic wilderness of Longyearbyen’s impressive natural surroundings;and take in Soviet-influenced Barentsburg, with only 500 inhabitants.A call at Trondheim is followed by the small tourist village of Geiranger, set in the UNESCO-listed Geirangerfjord – home to the stunning ‘Seven Sisters’, ‘Suitor’ and ‘Bridal Veil’ waterfalls.

Remote and difficult to reach – yet achingly beautiful – Greenland is one of the world’s most sought-after destinations.

Tórshavn, on the Faroe Islands, is the first port of call, originally discovered by the Vikings. Iceland’s lively capital, Reykjavík, follows, where guests should take time to bathe in the relaxing geothermal waters of the Blue Lagoon spa, Iceland’s most popular attraction.

Guests can then explore the rugged mountain terrain of Tasiilaq, in Eastern Greenland – a maiden call for Fred. Olsen – and gaze at the steep mountains and glorious glaciers that line the winding narrow waterways of Prins Christiansund, past the 1,760-metre-high ‘Thumbnail’ cliff at Torssukátak, before arriving in Narsarsuaq, with its panoramic fjord views.

Glide along the southern Greenland fjord of Tunulliarfik and admire the unspoilt, wild scenery, before reaching Qaqortoq, founded by Norwegian traders in 1775 and retaining many of the colonial buildings from that time.

Boudicca then cruises amongst the vast landscapes that surround the Lichtenau Fjord and arrives at Nanortalik – Iceland’s most southerly town. From here, guests can take a trip to nearby Uunartoq and swim in the waters of the hot springs.

Following a scenic journey along the spectacular Tasermuit Fjord, this cruise makes a final call in Belfast(Northern Ireland), for a chance to see the Harland and Wolff Dockyard, now owned and operated by Fred. Olsen.

Iceland – ‘The Land of Fire and Ice’ – has emerged as an up-and-coming tourist destination in recent years. Because of Fred. Olsen’s Norwegian heritage, the cruise line has generations of experience and a passion for sailing these northern waters, visiting the three accessible sides of Iceland – the west, north and east – giving guests an incredible insight!

Klaksvík, on the Faroe Islands, is a maiden call for Fred. Olsen. Here, guests can visit the old Norse-style Christianskirkjan Church. The next port, Seyðisfjörður, is regarded as one of Iceland’s most remote and hard-to-reach locations, making a visit here even more special. The valley above the town centre echoes to the sound of the 25 thundering waterfalls, formed by the river Fjaroara.

Spot soaring seabirds and go whale-watching in Akureyri, in northern Iceland, which was voted one of Lonely Planet’s top ten recommended European travel destinations in 2013. Guests can take a tour to ‘Godafoss Waterfall’ – meaning ‘Waterfall of the Gods’ – or visit a wealth of natural wonders.

Next comes Ísafjörđur, perched on a dramatic sand spit, jutting out into an inlet on one of north-west Iceland’s deepest fjords. Black Watch continues past the sea-cliffs of Haelavikurbjarg and Hornbjarg, to Iceland’s capital city, Reykjavík. A tour to ‘The Golden Circle’ is highly recommended, to explore the ‘Big Three’: ‘Gullfoss’ – the ‘Golden Waterfall’ – the ‘Strokkur Geyser’ and Thingvellir National Park – a UNESCO World Heritage Site.

Prices listed for these cruises are based on two adults sharing a twin-bedded, Inside cabin, and include accommodation, all meals and entertainment on board, and port dues.

Fred. Olsen’s new 2016/17 cruise programme went on sale on 5th March 2015 and led to record-breaking sales for the month of March, with a total of £22.4 million taken in bookings, beating the previous record of £17.8 million in March 2014. An amazing £2.1 million was also taken in revenue on the day after the launch, on Friday 6th March 2015, making it the highest-selling day ever in Fred. Olsen’s history.

Fred. Olsen is delighted to be named a ‘Gold Trusted Merchant’ by independent review site Feefo in 2015, for the second year in a row. This accreditation is based on genuine customer feedback and, to date, Fred. Olsen has received over 10,500 reviews, with 95% of these being in the ‘Good’ or ‘Excellent’ categories.

Whether it is seeing dramatic icebergs ‘up close’, or watching the sun rise in an exotic location, there are plenty of reasons why a cruise is high on holidaymakers’ ‘bucket lists’ for 2017! 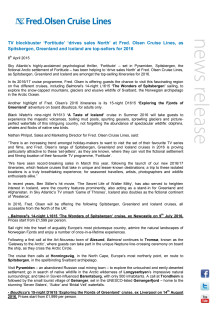 Sky Atlantic’s highly-acclaimed psychological thriller, ‘Fortitude’ – set in Pyramiden, Spitsbergen, the fictional Arctic settlement of Fortitude – has been helping to ‘drive sales North’ at Fred. Olsen Cruise Lines, as Spitsbergen, Greenland and Iceland are amongst the top-selling itineraries for 2016.