Fred. Olsen Cruise Lines four more traditional, intimate ships – Balmoral, Braemar, Boudicca and Black Watch – visit over 200 destinations around the world, from ten convenient, regional UK departures ports – Southampton, Dover, Harwich, Tilbury, Bristol (Avonmouth), Liverpool, Newcastle, Rosyth (for Edinburgh), Greenock (for Glasgow) and Belfast – however some of the most popular destinations with cruise guests are not too far from home. Europe boasts dramatic landscapes, colourful cultures, beautiful beaches and cosmopolitan cities, which is why Fred. Olsen has put together a list of its ‘Top 5’ ex-UK European cruises for 2015.

Black Watch will depart from Liverpool and cruise to remote islands, ancient cities and Mediterranean beaches on this exploration of the Adriatic. Guests will be able to discover 12  destinations, including Kotor (Montenegro), which offers spectacular fjord-like scenery; Venice (Italy), for an overnight stay; Hvar (Croatia), which has become known as the ‘St. Tropez of the Adriatic’; Dubrovnik (Croatia), famously named the ‘Pearl of the Adriatic’ and Valletta (Malta), a tiny island with stunning baroque architecture.

The result of a creative collaboration between Mr Fred. Olsen Senior and Her Grace, The Duchess of Northumberland, this cruise will follow in the footsteps of the famous ‘Agatha Christie’ route. On board guests can enjoy themed entertainment, guest lecturers – discussing poisons, potions and some of the most iconic murder mystery stories ever told – and have the opportunity to take part in what will be the largest participative murder mystery ever undertaken at sea. The story of evil intent will unfold both on the ship and in the fascinating locations, which includes two very special stops at the Duchess of Northumberland’s 'Poison Garden' at Alnwick Castle and Mr. Fred. Olsen Senior’s 'Poison Garden’ in Guimar, Tenerife.

Stylish Braemar is able to cruise along some of the most charming rivers in Europe including the Loire, Garonne and Gironde Rivers in France, due to her shallow draft. On board guests will be able to enjoy a peaceful cruise to Nantes, Bordeaux – both with overnight stays – and La Rochelle, for tours to La Pallice. With plenty of time in all of the ports of call, guests will be able to soak up the medieval history of Nantes, taste the famous wines of Bordeaux and choose to spend some relaxing time in the pretty towns of La Rochelle or La Pallice before returning to Dover.

On board this cruise guests will be taken to the very heart of the Baltic, docking just footsteps away from famous landmarks, architectural delights and vibrant city centres. Guests will be able to explore six of Europe’s finest destinations, including Travemünde (Germany), where guests will be just 150 metres walk from the pretty harbour front; cosmopolitan Copenhagen (Denmark) – Braemar will be just 300 metres from the famous statue of the ‘Little Mermaid’ at Langelinje Pier and the ever-popular destination of St. Petersburg (Russia).

This exploration of the Norwegian Fjords on board Balmoral stops at four of Norway’s impressive towns and cities; Stavanger, where guests can take a short boat trip to Lysefjord; Bergen, known as Norway’s second city; Flåm, a quaint town nestled on the edge of the Aurlandsfjord and Olden, located at the inner end of the Nordfjord. Plus guests will enjoy many hours of scenic cruising through Nærøyfjord, Nordfjord and Maurangerfjord.

Fred. Olsen was proud to be namedone of Which?’s Top 3 cruise lines in the UK and a ‘Recommended Provider’ in its 2014 cruise survey. Fred. Olsen was also delighted to be voted ‘Best for Enrichment’ for the third time at the ‘Cruise International Awards 2014’.

Our top 5 European cruises from the UK

Embark on a Fred. Olsen cruise from the UK for a chance to experience Europe like never before! Departing from ten UK ports, our European cruises venture as far as the beautiful Baltic borders in the north, to the sunny climes of the Mediterranean in the south. In case you’re stuck for holiday ideas, we’ve put together a shortlist of our top 5 European cruises for you to consider. 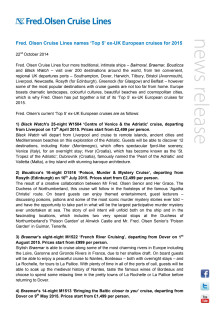