Fred. Olsen Cruise Lines is excited to announce that, in 2015/16, it will be visiting no fewer than 245 destinations in 81 countries around the globe, including 42 countries on its 2016 ‘Grand Voyages’ alone. The Fred. Olsen Cruise Lines’ ‘Launch Brochure’ for the new 2015/16 itineraries will be unveiled to existing guests on 18th March 2014 and the cruises will go on general sale from 24th March 2014.

“In an increasingly cluttered market, where the consumer finds it difficult to distinguish the differences between one brand and another, Fred. Olsen Cruise Lines is proud to offer innovative cruise experiences and destinations that stand out, and where every itinerary is unique.

“We strive to bring the world closer to everyone in the UK through our regional departures and smaller ships, and we fully expect to build on our growth in 2013 and 2014.”

Fred. Olsen will also be embarking on its inaugural African ‘Grand Voyage’ on board Boudicca in 2016, of 76 nights’ duration – the first time that this smaller, more traditional ship has ever been deployed on such a long cruise – and will be calling at the new and exotic ports of Luanda (Angola), Maputo (Mozambique) and Zanzibar (Tanzania).

Fred. Olsen’s 115-night ‘Around the World’ ‘Grand Voyage’ on Black Watch in 2016 will be taking in a grand total of 27 countries, visiting the maiden port of Tuticorin, in India, as well as the popular destinations of Yangon, capital of Myanmar (formerly Burma), and Komodo Island, home to the famous Dragons, which is only accessible by sea.

Following their tremendous popularity in 2014, Fred. Olsen will be offering even more river cruising itineraries in 2015/16, on Braemar – which is ideal with its shallow draft – taking in the French rivers, the German waterways and a Spanish itinerary, cruising up the Guadalquivir to the centre of Seville.

Another feature of Fred. Olsen’s 2015/16 cruise programme is its series of ‘Into the Heart of the Baltic’ voyages. These specially-written Baltic itineraries allow Braemar to dock at ports and berths right in the city centre, giving guests easy access to some of the Baltic’s most spectacular sights.

Fred. Olsen will also be offering two Adriatic cruises – one on Black Watch from Liverpool in April 2015 and the other on Braemar from Dover in September 2015 – staying overnight in Venice, Italy, where Fred. Olsen’s smaller-sized ships can still call, and offering the amazing ports of Kotor (Montenegro), Durres (Albania) and ‘picture perfect’ Dubrovnik, in Croatia, which is one of Fred. Olsen guests’ favourites.

In 2015/16, Fred. Olsen’s fleet will be undertaking even more ‘scenic cruising’, visiting 51 picturesque locations, including Lysefjord – one of the ‘pearls of Norway’, featuring ‘Preikestolen’ (‘Pulpit Rock’) and ‘Kjerag’ (‘The Mountain Bolt’) – the Bay of Kotor in Montenegro, and the Turku and Stockholm archipelagos.

Fred. Olsen will be offering a number of new destinations in 2015/16, with maiden calls into seven ports:

Brevik (Norway) – this small town in Telemark, regarded as one of the best-preserved towns from the sailing ship era, is located at the far end of the stunning Eidanger peninsula (‘Eidangerhalvøya’). It is famous for the Telemark Canal, completed in 1892, which stretches 105 Kilometres from Skien to Dalen, and consists of 18 lock chambers

Flensburg (Germany) – it is the third largest town in Schleswig-Holstein and one of the northernmost in Germany, on the German-Danish border, lying at the innermost tip of the Flensburg Fjord, an inlet of the Baltic Sea

Bremen (Germany) – set on the River Weser, Bremen has beautiful examples of old Hanseatic Gothic architecture in the ‘Marktplatz’ and narrow timber buildings in the ‘Schnoor’ quarter – the oldest part of the city. Braemar is one of the very few cruise ships able to call here, due to her smaller size and shallow draft

Red Bay (Canada) – Red Bay is a fishing village and former site of several Basque whaling stations on the southern coast of Labrador; between 1550 and the early 17th Century, it was a major Basque whaling area

Argostoli (Greece) – located on Kefalonia (or ‘Cephalonia’), the largest island in the Ionian Sea, this beautiful town has an attractive waterfront and colourful fruit market, where farmers sell their fresh produce

Savannah (USA) – Savannah is the oldest city in the U.S. state of Georgia, established in 1733, and is a former British colonial capital, with an international reputation for Southern charm and hospitality

Charleston (USA) – founded in 1670 as ‘Charles Towne’ in honour of King Charles II, Charleston adopted its present name in 1783. It is the oldest city in the southeastern State of South Carolina, and has been won awards for being ‘America’s friendliest city’

- Boudicca’s 16-night ‘Mystery, Poison & Murder’ themed cruise from Rosyth to the Canaries in July 2015, linking the ‘Poison Garden’ of Alnwick Castle – created as part of a £40-million investment in the incredible grounds, and the pride of the Duchess of Northumberland – and the ‘Poison Garden of Guimar’ in Tenerife. Take part in what is planned to be the biggest participative murder mystery ever undertaken…a first for any cruise line!

- ‘Film Stars & Fast Cars’ is back by popular demand! A 15-night cruise from Dover in May 2015, visiting Cannes, for the famous Film Festival, and Nice, to have the opportunity to go the Grand Prix at Monaco. Plus, Fred. Olsen’s first-ever Le Mans cruise, watching part of the 24-hour race, on Braemar in June 2015, departing from Dover for four nights

- A ‘Superbikes & Scenic Hikes’ cruise of nine nights on  from Southampton in May 2015, calling into Douglas on the Isle of Man for the famous TT Rally

- A series of meteorologically-themed cruises, taking in Nature’s most spectacular phenomena. A last chance to see the ‘Northern Lights’ from Southampton on Boudicca in February 2015, for 16 nights, and three sell-out 13, 14 and 15-night ‘solar eclipse’ cruises on Braemar (from Dover), Boudicca (from Southampton) and Black Watch (from Southampton) in March 2015, where Fred. Olsen guests will be given prime position off the Faroe Islands to view this rare occurrence

- A brand-new concept for Fred. Olsen, and possibly within the cruise industry as a whole, is the ‘You Choose Your Cruise’ on Braemar in October 2015, where guests vote for the next port of call as the cruise progresses, from two choices each time. Guests can opt for vibrant Gaudi-inspired Barcelona versus the traditional Palamós on the Costa Brava; or cultural Valencia versus Mallorca's cathedral city of Palma; or Andalucian Malaga for the Alhambra Palace and Granada versus Gibraltar's unique blend of Anglo-Spanish culture and tax free shopping!

- All four Fred. Olsen ships will be coming together in Bergen – in Norway, the cruise line’s historic homeland – on 28th July 2015, docking alongside for the first-time ever

- Fred. Olsen is fly-cruising back to the Caribbean in 2015, with a selection of 14 and 16 night sunshine breaks via Bridgetown, Barbados. For the first time, Scotland will have its own no-fly Caribbean cruise, sailing from Greenock (Glasgow) on Black Watch in November 2015 for 32 nights

- An ‘Arctic Adventure’ cruise from Newcastle on Boudicca in August 2015, combining the far-flung destinations of Greenland – the last year that Fred. Olsen will be visiting this little-known natural masterpiece – Iceland, Spitsbergen, and the Norwegian fjords, all on one intrepid 27-night Arctic exploration!

- An ‘Elvis Cruise’, visiting Randers, near Århus, known as the ‘Graceland of Denmark’, on Braemar to commemorate the 80th birthday of ‘The King’ in April 2015

For further information on Fred. Olsen Cruise Lines, visit the website at www.fredolencruises.com

Fred. Olsen Cruise Lines is launching two new ‘Grand Voyages’ in 2016: Boudicca's 76-night ‘Around Africa and into the Indian Ocean’ cruise, D1601, departing from Southampton on 5th January 2016 - the cruise line’s first ever sailing of this kind on board Boudicca – and Black Watch's 115-night 'Around the World with the South Pacific' cruise, W1601, departing from Southampton on 8th January 2016.

Fred. Olsen Cruise Lines is excited to announce that, in 2015/16, it will be visiting no fewer than 245 destinations in 81 countries around the globe, including 42 countries on its 2016 ‘Grand Voyages’ alone. The Fred. Olsen Cruise Lines’ ‘Launch Brochure’ for the new 2015/16 itineraries will be unveiled to existing guests on 18th March 2014 and the cruises will go on general sale from 24th March. 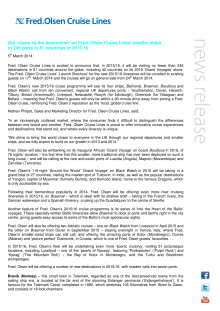 Fred. Olsen Cruise Lines is excited to announce that, in 2015/16, it will be visiting no fewer than 245 destinations in 81 countries around the globe, including 42 countries on its 2016 ‘Grand Voyages’ alone. The Fred. Olsen Cruise Lines’ ‘Launch Brochure’ for the new 2015/16 itineraries will be unveiled to existing guests on 18th March 2014 and the cruises will go on general sale from 24th March.