To make cruising with Fred. Olsen Cruise Lines even more attractive to solo guests, the cruise line has introduced a ‘no single supplement’ on certain grades of twin cabins for sole occupancy, on a selection of 2014/15 cruises. These special 'singles cruises', which come into effect from 1st March 2014, mean that a solo guest, occupying a twin cabin, will pay the same per person rate as a couple, on applicable cruises.

Once on board a Fred. Olsen ship, solo travellers will find exclusive gatherings for them to get to know each other, and staff on board will seat them together for dinner, and arrange companions for solo travellers when going ashore, if required. There are also Gentleman Hosts and Dance Couples on board the ships to provide dancing partners for solo guests. The relatively small size of Fred. Olsen’s fleet of ships – Balmoral, Braemar, Boudicca and Black Watch – and the relaxed and friendly atmosphere on board make Fred. Olsen cruises especially attractive for those travelling alone.

Charming Stavanger is the first port of call, and the Old Town – ‘Gamle Stavanger’ – has narrow winding streets to stroll through, and quaint wooden houses to explore. Many of the attractions can be reached on foot, and as you are travelling around the city, look out for the 23 cast iron figures, sculpted by Antony Gormley, dotted around at different locations.

Next, Balmoral calls at Bergen, where guests can explore the vibrant fish market and the colourful wooden houses along the waterfront. Picture-postcard Olden follows, and the breathtaking scenery will leave you with lasting memories. The town is the base for a journey to the Briksdal Glacier, and en route you will pass the magnificent Lokenfossen Waterfall.

Flåm is the final port on this inspirational cruise holiday, with its incredible natural beauty. Surrounded by towering mountains, roaring waterfalls and deep valleys, it is prefect for those looking for a one-of-a-kind experience with nature. Take the fantastic railway journey to Myrdal, climbing almost 2,800 feet through tunnels, over bridges and past stunning waterfalls.

The first call is to Portugal’s lively capital, Lisbon, whose atmospheric Alfama district has winding alleyways and historic churches, and where village-life gossip is exchanged over bread and wine at tiny restaurants or the public baths.

Pretty Funchal (Madeira) comes next, where the subtropical climate enables the most stunning of flowers and plants to flourish. For guests with a sense of adventure, there is the cable car up to Monte from Old Funchal, with a return downhill in the ‘Monte Toboggan’ – this looks like a converted laundry basket on wooden runners, and is steered by two surefooted attendants, who use their boots as brakes!

The cruise then visits Santa Cruz on La Palma, a treasure trove of beautiful architecture, markets and cafés. Braemar continues onto rugged La Gomera, serenely unspoilt and dominated by majestic Mount Garajonay. Teeming with rocky coasts and beaches, guests will experience both sides of this beautiful island, with calls to Valle Gran Rey and San Sebastian.

The final port is Las Palmas in Gran Canaria. This island has year-round warmth and is the perfect place to soak up the sun’s rays. Or why not take the opportunity to experience the mix of Renaissance, Gothic and Neo-Classical architecture the island has to offer.

La Coruna is the first port of call, where architectural styles range from the medieval quarter to excellent modernist buildings. This is home to the world’s oldest lighthouse, the Torre de Hercules, which towers over 60 metres above the shoreline, giving spectacular views from the top.

After a stop in Galician Vigo, Black Watch continues onto Leixoes, for tours to the UNESCO World Heritage city of Oporto, which was recently named ‘Best European Destination 2014’ by the European Consumers Choice.

Lisbon is next, and from here you can visit Sintra, a delightful village set in the tree-clad hills north of the city. The cruise continues onto pretty Honfleur in France, where guests can explore the winding streets and 15th Century wooden church; or ‘people watch’ at one of the many cafés lining the colourful harbour.

Stay overnight in Lisbon, with plenty of time to discover this cool and cosmopolitan city, spread out over seven hills on the north of the River Tagus. With an exciting mix of palaces, Art Nouveau cafés, museums and bridges, guests can take their time exploring this fascinating city.

Spend a day each on the islands of Lanzarote (Arrecife), Gran Canaria (Las Palmas) and Tenerife (Santa Cruz), where a beautiful range of flora and fauna, friendly locals, breathtaking scenery and gorgeous beaches beckon.

Finally, call into Leixoes, where tours to Oporto – a favourite of Port wine lovers – are highly recommended.

Prices include accommodation, all meals and entertainment on board, and airport/port dues.

For those solo cruisers who prefer to occupy a single cabin, Fred. Olsen has a number of cabin options available on each of its four ships, covering all grades, from ‘Single Inside’ and ‘Single Outside’ cabins, to ‘Single Balcony Suites’. Overall, the Fred. Olsen fleet has 190 single cabins; Braemar offers 40 such cabins, Black Watch and Boudicca each have 43, and Balmoral has 64.

To make cruising with Fred. Olsen Cruise Lines even more attractive to solo guests, the cruise line has introduced a ‘no single supplement’ on certain grades of twin cabins for sole occupancy, on a selection of 2014/15 cruises. These special 'singles cruises', which come into effect from 1st March 2014, mean that a solo guest, occupying a twin cabin, will pay the same per person rate... 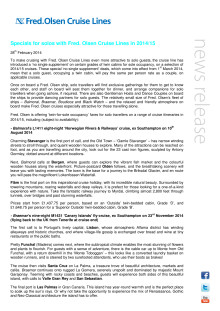 To make cruising with Fred. Olsen Cruise Lines even more attractive to solo guests, the cruise line has introduced a ‘no single supplement’ on certain grades of twin cabins for sole occupancy, on a selection of 2014/15 cruises. These special 'singles cruises', which come into effect from 1st March 2014, mean that a solo guest, occupying a twin cabin, will pay the same per person rate...