The Great Wall is celebrated as the world’s largest manmade structure and was added to the UNESCO world heritage list in 1987. Many people often think that it is one fortification that is continuously linked. However, it is actually a series of walls built at different times which overall, stretches across over 13,000 miles of Chinese countryside.

The big draw to this worldly wonder is the chance to walk along the paths of this incredible manmade piece of architecture that dates back to as early as the 5th century BC. Some parts of The Great Wall run parallel, made from many materials including stone, wood and brick, tumbling over the vast rolling hills of China.

Bring your camera and your walking boots to bask in the ambiance of rural panoramic views - one we are not so used to seeing given the country is a frontrunner for technological advances and sky-high industrial cityscapes.

Click here to Trek like a true explorer and conquer the Great Wall of China by sailing aboard Balmoral departing in January 2015. 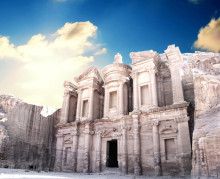